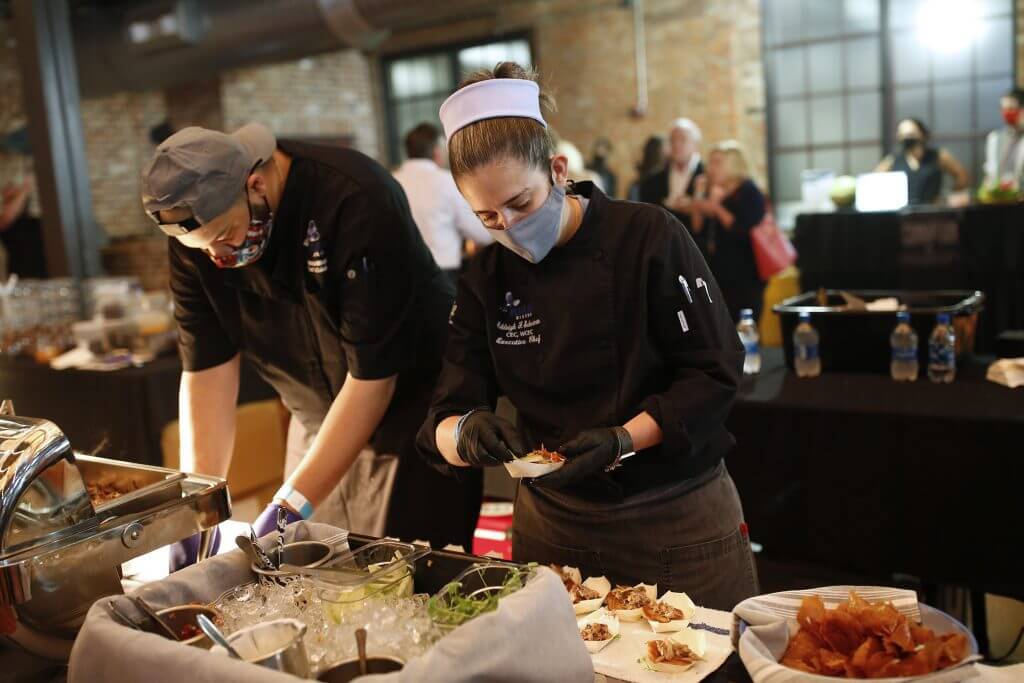 On Monday, August 9th, the North Carolina Restaurant & Lodging Association (NCRLA), hosted its fifth annual NCRLA Chef Showdown event at Bay 7 in Durham. As the driving force behind North Carolina’s restaurant & foodservice industries, NCRLA brings chefs from across the state together for this legendary event that celebrates N.C. products and ingredients in the hands of talented culinary artists. The event crowns the Best Chef, Best Pastry Chef and Best Mixologist in North Carolina upon its conclusion.

Saif Rahman, executive chef of Vidrio in Raleigh, was named the NCRLA Chef of the Year. Saif finds inspiration in Mediterranean dishes and ingredients but takes pride in sourcing local ingredients and providing a seasonality to his dish offerings and menu selections each season. Growing up in Bangladesh, Saif developed a love of cooking from watching his grandmother in the kitchen. Throughout his culinary career, he has worked under a variety of well-known chefs, including Chef Jose Andres. He recently joined the Vidrio team and is looking forward to expressing his creative passions through dishes at the restaurant as well as showcasing the history of the dishes themselves. 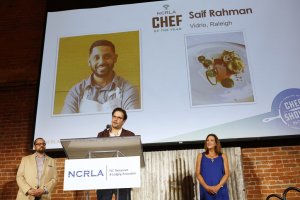 Tiesha Whittaker, founder of Buttermilk Boutique in Clayton, was awarded the NCRLA Pastry Chef of the Year! Tiesha also grew up learning to cook pastries with her grandmother and great-grandmother. Many of her recipes today seek to keep their legacy and those memories alive. After completing Boston University’s Master of Liberal Arts in Gastronomy Program, Tiesha worked for a variety of bakeries before starting her own in 2013, including Glutenus Minimus and Cakes To Remember. Today as owner and operator of Buttermilk Boutique, Tiesha puts a strong focus on using North Carolina ingredients to make her fine Southern pastries, including homemade marshmellows, pistachio crème brûlée and cinnamon bun cupcakes. She even makes gluten free cakes! At the NCRLA Chef Showdown she blew the judges away with her chocolate cigar that showcased a variety of local products. 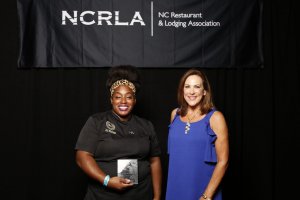 Colleen Hughes, representing Sutler’s Spirits Co. in Winston-Salem, was honored to receive the NCRLA Mixologist & Distillery of the Year! Colleen is well-known in the Charlotte area where she is managing the alcohol program at four different business operations, including Haberdish where she both manages and bartends. She is also the former President of the Charlotte Chapter of the United States Bartenders Guild. At the competition, she generated all the buzz with her Sutler’s Gin cocktail flavored with blackberry, pine, and sea salt!

Overall, twenty chefs and six mixologists from across our state competed for these titles. The group was judged by industry experts who not only looked for presentation and taste of the dish, but also the use of North Carolina ingredients. Event attendees were also able to join in on the fun by nominating the People’s Choice winners for Chef, Pastry Chef and Mixologist. Congratulations to Matthew Rivers, Head Chef with Timberlake’s Restaurant at Chetola Boone in Blowing Rock, Savanna Broder with Kimpton Tryon Park Hotel in Charlotte and David Schmidt representing the Hackney Distillery in Washington.

These chefs and mixologists represent a small hand-full of culinary artists who utilize local ingredients in their dishes. We are thankful for their support of and partnership with farmers across our state to accomplish this mission. Our Got To Be N.C. program is a proud sponsor and presenter of this event each year for that very reason! With a focus on eating local, we can continue serving the community one farm and one dish at a time.

Note: All photos in this blog are credited to Eamon Queeney, freelance commercial and editorial photographer. All his information, including how to contact and hire him for your next event, can be found on his website.